I’ve been neglecting this blog a bit. I realised since I post at

tardis-library every week (ish) I could post here every week too. And I’ve been very remiss on not introducing you to Merry, since I’ve have him for four weeks. 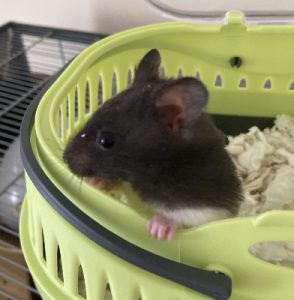 He loves running on his wheel – it’s pretty much the first thing he does when he gets up at night – he only goes and looks for the food that’s magically appeared around his cage later.

He’s used to be handled, so I can pick him up and stroke him, but he lumps it rather than likes it. He’s happy to take treats (and food, but he prefers treats) off my hand. But unless I’m feeding him or sorting out his wee, he’s scared of me being around – if he gets up for a drink and I talk to him or move, he freezes. He’s a silly boy (as I tell him often). 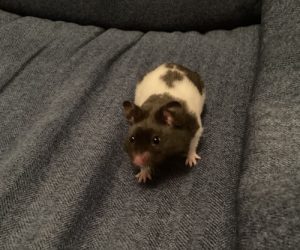 Hopefully he’ll be up for coming out to play a bit more, so then there will be more photos of him. Photos of just his head don’t come out well after dark, and in a dark corner of my lounge/